Message Direct begins its research by understanding the company, business, product, or non-profit organization first. After reviewing every possible idea or angle for a clients marketing/branding possibilities, we then move forward. Branding and marketing go hand-in-hand. Making a lasting impression and connection in every area of the marketplace becomes critical. Portraying the BEST impression with powerful messages and graphics makes for great communication.

The state agency group — Nebraska Health & Human Services System began pursuing ways to present to the entire state without leaving out any youth. All cultures of youth are represented from east to west in the state. Strengthening the health and well being of Nebraska Youth became the theme. Message Direct and Nebraska Health & Human Services System worked together to accomplish this very exciting and memorable brochure explaining the efforts needed for Positive Youth Development in Nebraska. Message Direct designed the Logo first, then decided to include the star theme through-out the brochure using an angle trim-cut coordinating with the edge of the star on the cover. We used bright colors and multiple graphics to encourage motion and movement — to help guide youth toward the correct direction in life. The client said there was a extensive response from this promotion. All the designing in this piece was to convey a positive investment of youth development in the state. 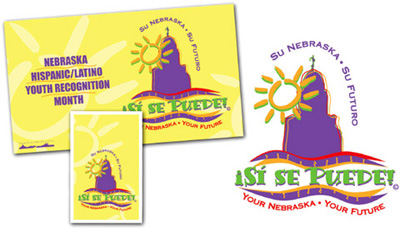 When we accepted this particular project we began with how important this project meant to the state of Nebraska. Understanding the instructions given to us and how to recognize and award Hispanic/Latino youth in the state of Nebraska became very evident. The state plan was to reach to every border of the state and make a meaningful and a success evaluation of all the deserving youth in those communities. After discussing with the agency — Nebraska Health & Human Services System decided to start the youth recognition month to help with reaching the Hispanic/Latino population in Nebraska. Message Direct initially started by understanding the culture first, then moved forward with the design of a logo. We created a contemporary loose Nebraska capital building dome graphic using popular colors represented in the Hispanic/Latino heritage and culture. If you look closely the special program logo resembles a sombrero. Represented here are a logo, large banner, and flier cover. Message Direct designed all aspects of the materials. A celebration to present awards to winners happened in the rotunda are of the Capital building.

The National Day of Prayer is an annual observance held on the first Thursday of May, inviting people of all faiths to pray for the nation. It was created in 1952 by a joint resolution of the United States Congress, and signed into law by President Harry S. Truman. Our Task Force is a privately funded organization whose purpose is to encourage participation on the National Day of Prayer. It exists to communicate with every individual the need for personal repentance and prayer, to create appropriate materials, and to mobilize the Christian community to intercede for America's leaders and its families. The Task Force represents a Judeo Christian expression of the national observance, based on our understanding that this country was birthed in prayer and in reverence for the God of the Bible.

Because of the faith of many of our founding fathers, public prayer and national days of prayer have a long-standing and significant history in American tradition. The Supreme Court affirmed the right of state legislatures to open their sessions with prayer in Marsh vs. Chambers (1983).

FACT — There have been 143 national calls to prayer, humiliation, fasting and thanksgiving by the President of the United States (1789-2014).

To learn more about The National Day of Prayer visit their website — www.nationaldayofprayer.org